Why Knowing Yourself In Marriage Is Critical • Wives Of Jannah 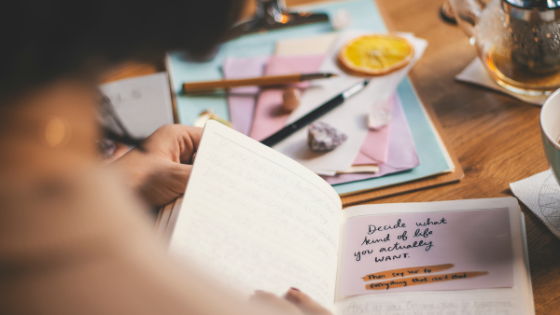 Why Knowing Yourself In Marriage Is Critical
by Megan Wyatt, Founder of Wives of Jannah

A good friend reminded me as of late that I have spent years on my own personal development and that it has paid off with immense self awareness, Alhamdulilah. I am vulnerable, willing to hold tough conversations, and very in touch with how I think and feel.

She reminded me because once you get used to being so incredibly touch with what's going on inside of you it's easy to forget that not everyone else in your personal life is on the same when having an important conversation with someone you care about. "Not everyone has done the same amount of personal work you have. Not everyone is ready to look within themselves that deeply," she said. As someone who has committed to over a decade of seeking to know myself, healing from the past, sorting my own baggage, and taken responsibility for my own shortcomings, wrong turns, and sins (an on-going journey of course) I don't want to imagine my life had I not taken this route.I shudder to think of how I would respond to tests I've been presented with over the past several years, alone, had I not been equipped with immense self-awareness and also self-acceptance.

People often misunderstand the work of "personal development" and think it's about having an obsession with one's self. On the contrary, the focal point is on becoming a better human being and in order to do that you have to increase your level of self-awareness about how you are currently living in your life. As a wife, for example, you might consider the following questions:Am I showing up as the wife I imagined I would be?Are my expectations of myself fair? What are they based on?How am I responsible for the state of my marriage currently? What do I really long for in my relationship that I haven't expressed?How am I handling myself when I'm upset?What are the hot buttons that trigger a bad reaction from within me?Am I afraid of being vulnerable in my relationship?If I did one new thing this month to be a more loving wife what would it be?What's upsetting me in my life and the effects of that are creeping into my marriage?The focus is on yourself but the results of that focus, or lack thereof, impact other people.

"Whatever is going on inside of us will, in one way or another, impact the people closest to us and that includes that dark sides of ourselves."

We are not islands as individuals. Whatever is going on inside of us will, in one way or another, impact the people closest to us and that includes that dark sides of ourselves. The question is are you willing to shine some light into your own darkness?
Are you willing to own your stuff, sort your baggage, recognize when you're triggered by something much, much bigger than what is presenting in the moment?One of the things I love the most about the personal development movement as a whole is that it doesn't say "Wait until you are in so much pain that you can't take it anymore and then finally reach out for help!" It says "Harness today to take the next step in becoming a better person because your quality of life is dependent on who you are and how you show up in your life and relationships. You deserve a quality and meaningful life like anyone else. It's yours for the building."A quality and meaningful life doesn't mean a perfect life without troubles. (Anyone trying to sell you perfection should be avoided at all costs.)But it means that old wounds, old patterns, and old habits which all lead you back into darkness no longer run your life. Instead, you are focusing forward towards the life you want to build.

Your marriage is such a significant part of your life. Does it not deserve that you invest yourself fully into being your best self?

The quality of any relationship will be measured by how the two people involved show up.

Look at the difference in these examples regarding a husband and a wife. This scenario is a really common one for many of my coaching clients, however, it goes both ways.

Example #1
He is insecure, but doesn't admit it to himself, so he tries to control his wife and where she goes, who she talks to, and how she talks using religion as his cover. She is afraid of not being enough so, despite how much it hurts, she lets herself be controlled. At least she is loved enough to be controlled. She is afraid of Allah being upset wit her also and isn't sure her worth in front of her Lord.

Example #2
He is insecure about himself and notices that he feels jealous when his wife interacts with a man in any way. He knows it's wrong but he feels extremely jealous. So he ends up controlling his wife and where she goes, who she talks to, and how she talks and resorts to using religious arguments to hide his true feelings. He feels bad when she cries but doesn't tell her. She knows he is being overbearing and out of line but feels afraid to take a firm stand against him. What if he pulls away from her and deprives her of his love? She is aware he is using religion the wrong way but isn't sure how to respond back to his arguments. She is pretending to be fine when.

Example #3
He is insecure about himself and notices that he feels jealous when his wife interacts with a man in any way. He makes istighfaar, takes a deep breath, and reminds himself that he is worthy of her love. He reminds himself to treat her well and focus on what is within his control which is behavior as a man. She notices a bit later he is tense and asks "What's wrong." He says, "Triggered. Sorry, give me a few minutes to calm down." "I'm sorry you feel that way, " says says and holds his hand in silence giving him space as she now understands what's wrong. He silently asks Allah for strength and she silently asks Allah to let her be a source of comfort for him.

Example #2 shows a slight progression in terms of self-awareness but no ability to change the outcome. Most people I work with in coaching are in stage #1 or in stage #2. My job is to help them grow into stage #3.

In Example #3 you see ownership over a problem. You see two people who have made space for some personal baggage. He owns his weakness but controls how he treats his wife.

She knows she is worthy of being treated with respect and doesn't try to explain away her behavior as she knows she didn't do anything wrong.

They both hold on to each other until the moment passes and what was once a problem between them is now a means of coming closer together.

Whether a couple lives at level 1, 2, or 3 will be entirely up to them.

The more you know yourself the faster you can live at level 3.

You will never be fully healed, fully resolved, and fully over every wound in your life.

But you can be fully aware, take full ownership of how you manage yourself, and be a better person in all your relationships.

****
Looking for an online program to strengthen your marriage and learn more about yourself?
Check out the Wives of Jannah Digital Library and find the program right for you.

The Golden Rule in Marriage